Intimidation is a chump’s game 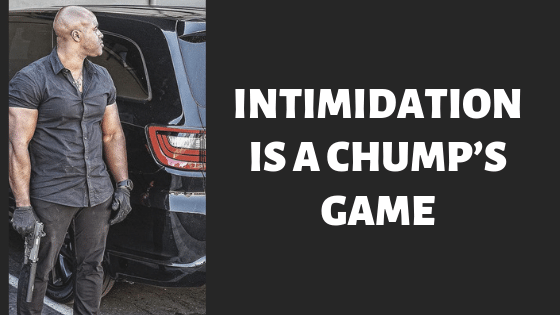 ⚜️Intimidation is a chump’s game. Sun Tzu said that all warfare was built on deception and he was right. Weapons are made to be felt, not seen or heard. People who are familiar with violence know that the spoils go to the man that can act most affectively first. Therefore if and when you’re dealing with a human who is trying to intimidate you, with that person doesn’t realize is that they are making themselves vulnerable by telegraphing their possible intent. People who are not prepared to do violence or who are not that familiar with it, have a tendency to be intimidated by these showcases of force but to the initiated person, these demonstrations are signs of weakness. Because if you were prepared to go to war we would already be fighting, there would be no words, no Katas, no demonstrations, just the clashing of body parts, gunfire or whatever it is we would be getting into that day.
The reality of this game simply is that you never know who you’re dealing with, large or small, male or female and you don’t know what their personal rules of engagement are. My advice is to be kind and respectful as your default mode for social interaction. Treat everyone as if they are capable of killing you. Always try to de-escalate any high friction situation because you never know how expensive it can get even if you do win. When it is time to go to work however… Don’t talk, don’t showcase your strength, don’t waste any time on intimidation but rather do the work aggressively, powerfully, overwhelmingly and totally. Do not fight with your opponent, end the fight with your opponent as quickly and safely as possible. Nine times out of 10 if you can end the fight with your ego, the fight with your external opponent will be avoided.
PROTECTOR by nature and by trade
-Byron .
⚫️Check out the podcast!⚫️
EXECUTIVE PROTECTION LIFESTYLE
http://www.executiveprotectionlifestyle.com/podcast/
.
📸 by @muzzleflashmedia
Go follow
@Protector_Nation
@executive_protection_lifestyle@bravo_research_group@byron_rodgers